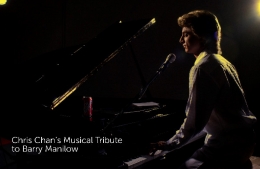 This is Chris Chan’s “Musical Tribute To Barry Manilow,” the undisputed number one adult contemporary artist of all time. Chris Chan recreates the magical studio 70’s sound heard at the peak of the Manilow hits era and delivers an entertaining evening of fantastic music that includes songs and album cuts from many of Manilow’s 50 + albums.  Chris performs hits from the Manilow collection that include: Copacabana, I Write The Songs, Mandy, Can’t Smile Without You, Could It Be Magic, Weekend in NE, The Old Songs, This One’s For You, V.S.M - Commercial Jingles Medley, Tryin’ To Get The Feeling Again, Somewhere In The Night, Daybreak, American Bandstand, Even Now, Ships, I Am Your Child, It’s A Miracle, along with some other hits and 70’s surprises.

Chris Chan performs at venues, conventions, and special events worldwide. In 2007, Chris toured with the Australian tribute production “Las Vegas Legends” in Sydney, Melbourne, and the Gold Coast. In 2006, Chris received the tribute artist industry’s prestigious Cloney award for Best Male Musical Star Impersonation as presented by the International Guild of Celebrity Impersonators & Tribute Artists. Chris has also performed in “Stars In Concert,” a successful long running musical production in Berlin, Germany, featuring a cast of the top tribute artists in the world. He has also performed at venues in Las Vegas, Orlando, New York, Miami, Atlantic City, Los Angeles, Honolulu, Toronto, Atlantic City, and at conventions for PricewaterhouseCoopers, American Express, and more. When not performing his tribute to Barry Manilow, Chris performs with his band, and as a Pianist & Vocalist, and Piano bar Entertainer for corporate and private events in Orlando’s top hotels & resorts, and for special events throughout the country.