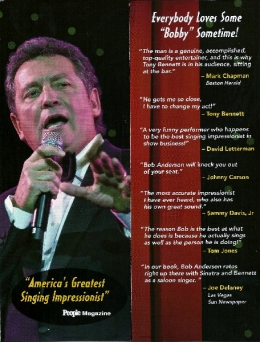 "America's Greatest Singing Impressionist!" - People Magazine
"SIMPLY THE BESTâ€¦â€The man is a genuine, accomplished, top-quality, entertainer, and that is why Tony Bennett is in his audience, sitting at the bar." - Mark Chapman, Boston Globe
"In our book, Anderson rates with Sinatra and Bennett as a saloon singer." - Joe Delaney, Las Vegas Sun Newspaper

When People Magazine named Bob Anderson, "the best singing impressionist in show business"….it truly was a wonderful compliment. But Anderson is more than an impressionist; he is an actor who becomes his subjects. Anderson has no rival when it comes to capturing the essences of the artists he pays tribute to. What separates Anderson from other impressionists is his mastery of the signature stylings of each individual that he re-creates and the level of detail he devotes to each artist. At 22 years old, Anderson started the genre of ‘singing impressionists’ that has taken over show business. He was the first to ever do the great artists on national television. Merv Griffin wrote his act, and Johnny Carson told his audience, "Bob Anderson is going to knock you out of your seats!" Tom Jones said, "The reason Bob is the best at what he does, is because he actually sings as well as the person he is doing!"

Bob Anderson not only graces the Casino Legends Hall of Fame and the Las Vegas Entertainment Hall of Fame, he has performed on over 100 national and international TV shows and commands the most prestigious concert venues throughout the world. Anderson’s recent appearance with the Las Vegas Symphony garnered rave reviews from the musicians, the audience, as well as its President. "The electricity in the concert hall was indescribable taking everyone back to a time in Las Vegas that we love and miss. Bob Transformed a concert hall into a showroom form the past. It was as though Dino, Sammy, Frank, Bobby Darin, Tony Bennett, Johnny Mathis, Andy Williams and Tom Jones, were all there close to our hearts and never to be forgotten!" Jeri Crawford, President Las Vegas Philharmonic