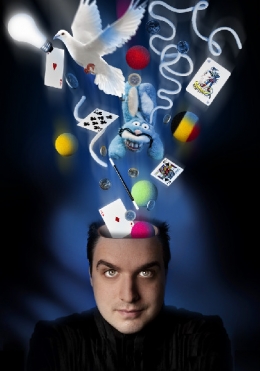 "Great Show!" - David and Victoria Beckham
"You opened a doorway to the imagination!" - Sean Penn
"Show me that trick again." - Bruce Willis
"I only know 2 people from Belgium; Jean-Claude Van Damme and Rafael." - Jay Leno
"Thank you for making me fly!" - Pamela Anderson
"Best show I ever saw!" - Rafael's mother

Rafael is truly a many-sided artist! He is an award winning magician, inventor, comedian, illusionist and world traveler. Magic and clowning inspired him at a very early age, setting up his first show at the age of 6.

He has appeared on stages all over the world, including Wintergarten Varieté in Berlin, the Opera House in Blackpool, Theater Carré in Amsterdam, Crocus City Hall Moscow, L'Olympia in Paris and performances before the Royal family at the Théâtre Princesse Grace in Monaco.

An impressive list of prizes makes him one of the top magicians in today’s magic scene. A few of his awards include: the “Magic Award” for best magician in Belgium, the prestigious Mandrake d’Or in Paris, and the Siegfried & Roy Golden Lion Award, which Rafael won in 2005 with his comedy magic dove act in Las Vegas.

He is certainly no run of the mill performer and is known for his innovative and daring approach to the art of magic.

His background in mime, circus, dramatic arts and commedia dell’arte helped to shape him into the incredibly off the wall and original act that he is today.

You will definitely enjoy his wacky and wonderful performance.