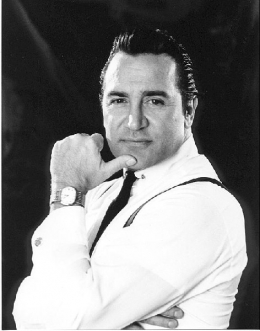 Phillip Sadalla has performed across the United States since 1979.

He has been a headliner in Las Vegas at The Desert Inn, The Sands, Bally’s, The Dunes, The Aladdin, Caesars, The Sahara, MGM, and is also a two time Las Vegas “Entertainer Of The Year.”

Phillip Sadalla created, produced, and starred in the Las Vegas stage show “Rock-and-Roll” and “Country Soul.” and created, co-produced, and starred in Las Vegas show-of-the-year, “Legends in Concert” starring as the late great Bobby Darin. The critics choice column in the biggest newspaper in Las Vegas “The Review-Journal” named Phillip Sadalla the “Best Entertainer of the Year.” Two years in a row he has won that award.

“Phillip Sadalla has an awful lot of talent,” said Don Usherson, entertainment writer for the “Las Vegas Review-Journal.” “He has a strong, distinctive voice, unique enough that it cannot be compared to anyone else. That’s a big plus.

He has a great repertoire of music for a performer, including great standards, up-tempo swing, even-beat ballads and contemporary pop songs.” This is a must see entertainer, singing the hits of Elvis, Bobby Darin, Frank Sinatra, and many more, a class act…don’t miss this show…!!!”

Phillip Sadalla has studied acting under Sherman Helmsley and Clifton Davis on the set of TV show “AMEN,” as well as formal training under Richard Carlisle at “Theater west,” in North Hollywood, California, and doctor Shapo of the “Encino Theater Group.”