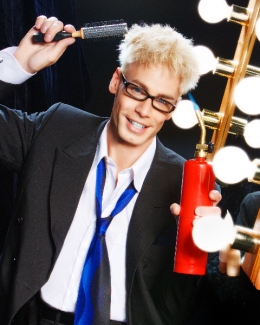 Murray’s star power has exploded onto the entertainment scene with the charisma, personality and talent of an entertainer born to be on stage and screen, after his successful run as a semi-finalist on NBC-TV’s “America’s Got Talent.” The #1 network summer series was viewed by over 22 million fans nationwide. Murray dazzled the judges: Piers Morgan, Sharon Osbourne and Howie Mandel by producing a Ferrari from thin air, transforming a girl locked in a cage into a 450 pound tiger and did the largest trick ever on “AGT” by vanishing an entire 1918 steam train locomotive in mere seconds. All of these illusions took place before a “live” and national “TV” audience, and brought standing ovations from the judges.

Fans of all ages were amazed and entertained when Murray performed 3 spectacular feats of illusion on “America’s Got Talent” last season. He charmed judges Piers Morgan, Sharon Osbourne and Howie Mandel with his signature electric blonde hair, personality and talent, while working with tigers, trains, cars and beautiful assistants.

Murray currently guest stars on the “hit” History Channel TV series “Pawn Stars” as a magic expert, and hosts the “live” “Pawn Stars” shows in venues throughout the country. He recently completed filming 5 episodes of a new kids’ TV series called “The Jadagrace Show.” Murray plays a comical re-occuring role on the show as “Murray the Magician.”

Murray co-starred on the popular VH1-TV series “Celebracadabra” highlighting pairs of magicians and celebrities who competed for $100 hundred thousand dollars and the title of “Best Celebrity Magician.” He has guest-starred on the comedy TV series “Reno 911” and NBC-TV’s “Last Comic Standing.”

Murray has performed in concert worldwide, and will return to headline at the historic Magic Castle in Hollywood, California, July 11-17, 2011.

Murray John SawChuck was born in Burnaby, British Columbia - Canada and always had the passion for adventure. At age 3, he began swimming and golfing. He learned how to play the accordion, keyboard and saxophone at 5 years old. At age 7, he began dance lessons that included: ballet, Russian, swing, break dancing, ballroom, etc. He was an avid athlete and enjoyed participating in soccer, baseball, snow skiing, horseback riding, etc.

Murray’s parents, John and Arlene presented him with a Siegfried and Roy magic kit when he was 7 years old and his uncle and aunt Bill and Olga gave him a magic gift that changed his life. Murray envisioned himself as an entertainer incorporating magic, music and dance in his routines. He wanted to perform for audiences like his idols Dean Martin, Johnny Carson, Lucille Ball, Danny Kaye and Phyllis Diller.

As a teen, Murray had over 21 different jobs from bus boy to fixing bicycles, and lifeguard at local pools. He continued to entertain folks by dancing, playing the accordion and saxophone. He continued his studies and received a degree in Broadcast Communications and Journalism.

When Murray was a young man he met Marvyn and Carol Roy, a.k.a. “Mr. Electric.” The couple had toured worldwide for over 50 years and mentored Murray while he grew from an accomplished magician to an international star.

Murray was the only magician globally who invented a magic act that included the manipulation of a multitude of Compact Discs when he began his professional career.

Murray has won over 24 awards for his performances nationally and internationally and received the title of “World Champion.” He has delighted audiences in theatres from Monaco and Paris to Las Vegas and the legendary Playboy Mansion.

Murray is very proud of becoming an American Citizen 2 years ago and contributes his time and effort to helping our troops. He hosted and performed at the “Toy Story 3” premiere for Snowball Express, an organization of 2 thousand families whose children have lost a parent in the war since 9/11. He dreams of performing on a USO tour overseas and supporting the U.S.A.