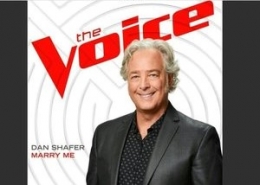 "Dan Shafer traveled across the country to Los Angeles to appear on 'The Voice.' After years of singing jingles, Dan stepped out on the stage and blew me away with Trains 'Marry Me' His cover gave me chills and he sounded better than some of the male Artists on top 40 radio." - Jakes Takes, Hollywood Insider
"Over the last 10 seasons of 'The Voice,' I've seen a lot of incredible, impressive and memorable Battle Performances - But None compare to the performance we just saw from Team Blake members Dan Shafer and Sundance Head. The two singers absolutely crushed it, leaving me, the audience, and the judges at a standing ovation." - Erin Brelsford, One Country
"Dan you have a very honest, genuine way of delivering your music. I love how you owned your space!!" - Alicia Keys
"You know Dan, you sounded so young to me. Like a 19, 20, 21 year old Vocalist. You, are what I love about the Voice. This guys got an amazing voice, I'm so glad I hit my button!!" - Blake Shelton

Dan Shafer is a Classic Rock Vocalist from Season 11 of the NBC Television Show, "The Voice." Dan Sang on some of the most iconic National Television Commercials of all time to include, "Transformers" (Robots in Disguise), “Aliens 3” (The Motion Picture), “BC Powder,” “Matchbox” (Lightning Key Cars), and so many more. Dan's show is made up of the Classic Rock Songs that make up the tapestry, and fabric of our Lives. Performing songs like "Dust In The Wind" by the group Kansas, "Going To California" by Led Zeppelin, or "Shooting Star" by Bad Company. Because the music comes first, and Dan Shafer will always be a fan, the audience will find it is self-singing along, escaping life for a moment, going back to a simple time, and one of the greatest periods of  Rock and Roll Music.

Dan Shafer, has earned the respect of his peers, and has shared the stage with Dolly Parton, Stained, Artimus Pyle of Lynyrd Skynryd, Carmine Appice of Vanilla Fudge and so many more. Some quotes: "You are the best male singers to come along in a while!"  -Kent Wells (Producer, Dolly Parton), “57 year old Dan Shafer travel across the country to Los Angeles to appear on the Voice. After years of singing jingles, Dan stepped out on the stage and blew me away with Trains “Marry Me”. His cover gave me chills and he sounded better than some of the male Artists on top 40 radio ” — Jakes Takes, Hollywood Insider, “I’m so happy for Dan. He is an image of hope  for everyone, to never give up on your dreams, never ever, ever!!!” — Miley Cyrus.

NATIONAL TELEVISION COMMERCIALS/JINGLES
I've been blessed to have been involved with several major television commercials, and I loved it!! Because I had such a diverse musical background, I became a first call session vocalist. One day I had to be Harry Connick Jr, and the next Paul McCartney, Paul Rogers. Robert Plant, or the Chi Lites. Some of the jingles I did were Transformers Gen 2, Aliens 3 the voice and Space Marines, BC Powder, Matchbox Lightning Key Cars, Bryans Hot Dogs, Vintage Gourmet Ice Cream, Bealls Dept Stores, Coors, New England Telephone, and many more. You can listen to my Jingle Vocal Sampler on my Music page.