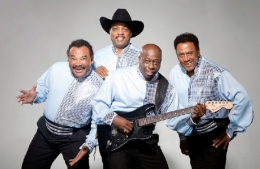 Yakety Yak (don’t talk back), Charlie Brown, Poison Ivy, Along Came Jones – these were just some of the hits of The Coasters in the late fifties.  A DooWop legacy, their influence defined the comedic style of the decade and continues to live on through Billy Richards’ Coasters.

Billy Richards’ Coasters have made numerous TV appearances over time, from the early years on “Dick Clark’s American Bandstand” to present day’s “America’s  Funniest People”.   They have performed at every major venue across the nation,  toured with the legendary rock ‘n’ roll greats and have been featured on several national TV commercials. The impact of the Coasters music deepens with time and continues to resonate with audiences today.

Billy Richards is a multi-talented entertainer, having sung, recorded and toured his entire adult life. He got his start in high school as a prominent member of the glee club and church choir. At the early age of 17, he sang with his uncle’s famed rock and roll group, The Robins. In 1962, he joined forces with the original bass singer of The Coasters, Bobby Nunn. They performed side by side in a Coasters group for over 24 years until Bobby Nunn's untimely death in 1986.

Billy Richards' Coasters have made numerous TV appearances over a wide span of time; from the early years on “Dick Clark’s  American Bandstand” to present day’s “America’s Funniest People.” The group has also been featured on several national TV commercials.

Billy Richards' Coasters are the supreme comedians of rock ‘n’ roll. What’s more, their impact has deepened with time. Their songs, their parodies and the tunes that became million selling records are revived in this new generation of music.

Billv Richards' Coasters continue to perform extensively, touring the United States, Europe, Canada and the Far East. Billy Richards manages the group and continues to uphold the tradition that made the original Coasters famous. Billy Richards’ Coasters is one of two legitimate Coasters groups performing today. The other group is led by Carl Gardner, an original member of The Coasters and inductee into the Rock n’ Roll Hall of Fame.