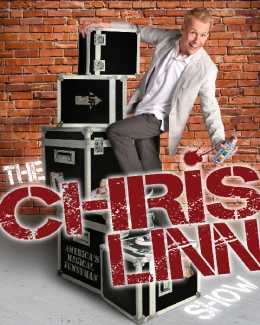 Take three parts comedy, add a dash of magic, and top it off with enough energy to make a can of Red Bull tired, and you get America’s Magical Funnyman™, Chris Linn. Not satisfied being a typical comedian or dime-a-dozen magician, Chris has developed a multi-dimensional comedy magic show that fuses special effects, off-beat magic and zany stunts into a unique, interactive performance. It is Chris’ playful personality and ability to connect with an audience, however, that truly makes him stand out as a performer that can get an entire theater energized and having fun.

Chris developed a knack for entertaining and a passion for comedy at a remarkably young age, and people around the country soon began taking notice.  In fact, ever since he performed his first professional show at age 15, Chris has never had another job.  Now, going on over 18 years as a professional entertainer, he has a pathological fear of ever getting a “real job”.

As an impressive testament to his skills at sleight of hand, Chris currently holds two Guinness World Records (and he is actively working on breaking two more).  Equally notable are the dozens of other prestigious awards Chris has received for his show, including being voted audience favorite at the Hong Kong Comedy Festival, and receiving the award of excellence from the Corporate Entertainers Association.  Chris is also the only comedy entertainer to ever receive the national Guiding Light Award for being a positive role model to America’s youth, not once, but three separate times.

Chris’ ability to keep an audience laughing with a diverse repertoire of clean comedy has made him the entertainer of choice for top international corporations, venues and tourist resorts.  Being in high demand keeps Chris constantly traveling and performing over 300 shows every year.  He has performed in all 50 states, entertained in 13 countries…and eaten way more airline peanuts than any rational human being should ever consume in a lifetime.  His continually growing fan base certainly guarantees that he won’t be slowing down anytime soon.

Audiences often recognize Chris’ signature routines from one of his numerous television appearances.  He has also written and produced several short films, including When Balloon Animals Attack, which has been featured recently on the ABC and CW networks. Off screen, Chris is often sought out as a creative consultant for a variety of motion picture and entertainment projects.

When he is not entertaining, Chris likes to keep his creativity flowing with a variety of projects to help make the world a little more fun (and funny).  Recently, Chris and his wife Brandy have been involved with a program to help send CDs from comedians, comedy movies, and humor books to U.S. troops overseas. To date, this has included donating over 250 copies of Chris’ own Cool Tricks and Funny Stuff DVD.  In late 2007, Chris launched a product line of unique “practical jokes and comedy diversions for adults” that will be available in gift shops across the country.

Despite all his accolades and accomplishments as America’s Magical Funnyman™, Chris is most proud of the fact that he has made a career out of making people laugh and smile.  “I am never depressed about having to go to work”, he says.