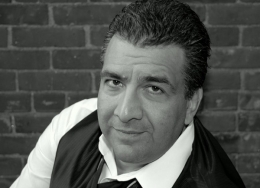 A seasoned professional, comedian Joe Yannetty draws on his travels, his Italian heritage, family situations and Boston blue-collar upbringing to bring family-oriented comedy to audiences around the world. Yannetty has been a guest on dozens of television shows, and has headlined around the world. Joe has also appeared at CAESAR’S PALACE in Las Vegas, RADIO CITY MUSIC HALL in New York City, and the KENNEDY CENTER in Washington DC.

Later, after quickly conquering the comedy club scene in New York City Joe brought his gift to Los Angeles and quickly became a regular performer at all of the top clubs on the west coast.

Joe has also made a name for himself entertaining at Corporate meetings, events, and private parties.

Yannetty has written for and toured with Rosie O’Donnell. He also spent some time as a morning show personality, writer, and producer on two of Boston’s top ten rated radio stations.

He was featured in a segment on the television show 20/20 regarding his appearance on Ed MacMahon’s TV show STAR SEARCH where Joe was victorious over the now famous Drew Carey.

The HBO movie SUCKERS, a motion picture Yannetty wrote and appears in, is based on a part of his own life. It has been distributed worldwide, and is constantly aired on major cable stations. In October of 2001 it was awarded the Premiere Video Award for Best Screenplay.

In 2004 he took to the seas. Joe Yannetty quickly became one of the most popular comedians on the world’s largest and most prestigious cruise lines.