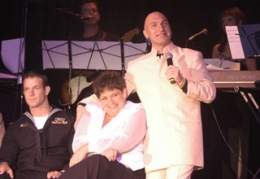 Audiences and participants are brought into a magical and inspiring world that surrounds them completely, catching the hypnotized and the un-hypnotized alike in its intriguing spell.

Hypnotica is an amazing new concept devised by show producer and entertainer Mark Maverick, who has astounded audiences around the world with his unique and exciting new show where audience members have the opportunity to truly become stars of the show.

Not only is Hypnotica a musical that is appealing to audiences of any age, it is also flexible and scalable. The show has the ability to be configured into many areas of the entertainment business, understanding that budgets and venue sizes sometime restrict the ability to book larger production style variety entertainment.

Designed to travel, Hypnotica can be adapted to ballrooms, arenas, outdoor venues, tents, cruise ships, and much more. To adapt Hypnotica to your event’s requirements, Hypnotica has been developed using a modular system of performance design. Each element of each production – costumes and costume designers; dancers, actors and choreographers; singers and musicians; sets, set designers and construction engineers; sound and lighting equipment, designers and technicians; and illusion equipment – can be added, removed, expanded, or scaled (up or down) to guarantee that your requirements are met perfectly.

Leveraging over 10 years of Experience and Multiple Forms of Entertainment to Guarantee a Memorable and Lasting Experience.

Entertainment should be memorable, leaving the audience with a lasting impression of having experienced something positive and emotionally uplifting. It is based on this value that Hypnotica has been designed to be an interactive experience that brings the audience together as the show unfolds, turning participants into the star.

An average “revue” with songs that people have all heard before or attempts at cirque-type shows usually miss the mark. Mark Maverick’s Hypnotica is a multi-media sensory experience centered around the enigma of hypnosis. It is a fabulous mix of performance art, music, thought, sight and sound. And because the participants are the true stars of the show, changing each performance with their unique contributions, every show is different from the others. This interactivity makes Hypnotica something that audience members have raved about.

Also, hiring one flexible group of entertainers to perform multiple acts makes sense. With Hypnotica, you can get a band, singers/dancers, a musical production, and an interactive comedy hypnosis show. The band can play before, during, after event (such as walk-on music during an awards presentation), culminating in a high-energy dance and show band late into the night. There is added value because needs of the client can be fulfilled with one group of entertainers.