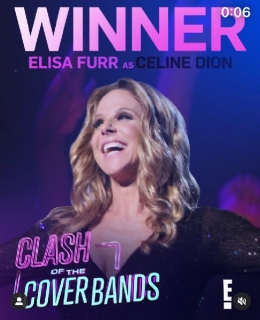 With quite the resume, Elisa's credits include Vegas and Cruise ship headliner, TV and film music composer, Iphone app creator, radio/tv voice over/singer, voice coach and music consultant to the Vegas headliners, songwriter, Pro tools and Logic audio engineer and MTV dancer. Her voice can even be heard on the Footloose casino slot machines nationwide.

But now, Elisa has been hailed as the top live singing Celine tribute artist in the world.

From the moment that Celine Dion's songs became radio friendly and Elisa started performing them in her cover bands,  others immediately began to recognize the similarity in Celine and Elisa’s voices. No matter where she was performing, for some reason when Elisa specifically performed a Celine tune, people would stop in their tracks to listen to the rest of the song. Those who knew her from an early age have been heard to say that in hindsight, Elisa’s natural voice sounded a lot like Celine's before Celine was even a household name.

When you experience Elisa perform her "Tribute to Celine" show, from the onset of the first beat of the music, Elisa explodes onto the stage with a passion and fervor unparalleled. With a magnetic stage presence and gorgeous custom made costumes, Elisa sails her way through an exciting set of Celine's greatest hits playing to the audience as if she were truly Celine up on that stage.

Elisa truly sings from her heart putting herself out there and baring her soul for all to see.
Her performances are fearless, vulnerable and raw. Singing Celine’s songs with intense passion, Elisa gets the crowds pumping with "Drove all Night", “Love can move mountains” and "I'm alive" while dancing around the audience to "River Deep, Mountain High" or covering every inch of the stage while moving to another high energy song. The house often erupts in a roar after she powerfully holds that last long, high note of "The Power of Love" or breathlessly ends the final phrase of "My heart will go on". There is just something about Celine’s music that creates absolute magic!

What to expect from Elisa’s "Tribute to Celine Dion show"?  An audience should come into her concert knowing that Elisa, paying the utmost respect to Miss Dion, will be singing and performing all of her beautiful hits and delivering them all live, coupled with recreations of some of her most famous breathtaking costumes. The authenticity of which Elisa delivers her impersonation results in a powerful and serious but highly entertaining concert experience.

Her rapport with the audience can result in a multitude of emotions. The ease in her performance delivery is always incredibly natural and in some parts of the show even comedic featuring original monologues every time. Her eye to eye contact with the audience has every person feeling like she is singing only to them and makes them feel connected and very much a part of the show. It is not unusual to see many crying, who seem to just experience an overwhelming emotion for reasons that are quite well known to Celine fans. Many audience members have their own personal connection to Celine and her songs as you can tell when you see the various strong reactions to Elisa singing many of Celine’s hit songs.

Whether she is performing with her band, an orchestra and backup dancers or taking the stage solo,  Elisa Furr definitely delivers a powerful concert much like the queen Celine herself has been doing for the past 37 years.

You will not be disappointed.