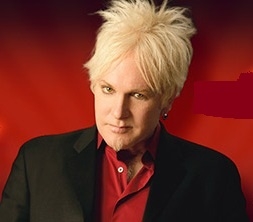 "The most amazing voice you'll ever love!" - Ron Taft, Daily & Associates
"Jimmy Hopper, the artist with an amazing voice and passion, and a show that spans from Rock to Opera, and Classical to Broadway..." - Greg Michael, Favorite Destinations
"...What is it about this guy that has the heavyweights of the entertainment industry bending over backwards to get him into their venues? Well, it's a pretty simple formula, actually--you take pure musical talent and you mix it with pure on-stage showmanship." - R. Keith Rugg, Action Magazine
"It doesn't take long for Hopper and his band to prove how he earned the title Entertainer of the Year..." - Ken Ross, Union News
"He packs the house for his performances at The Island. Words of warning, though: If you happen to go there on a 'school night,' have a good tardy note ready for the next morning because you'll probably miss your bedtime. You won't want to leave...!" - Orange Coast Magazine
"They line up early to snag seats for hot acts like Jimmy Hopper...a singer who's more popular than many headlining stars." - Fodor's Online

When National Enquirer invited readers to meet “the hottest unknown performer in America,” it was only a matter of time before Jimmy Hopper would make his Journey of the Heart one which would reach far beyond his popularity in the showrooms and other major venues of Las Vegas.  His interim move to the Big Apple provided numerous opportunities to tour nationwide while writing the music and score for the animation project and Broadway musical, The Day There Was No More Music, touted by some to be the next Lion King.  The animation version is currently in production stages.

His performances meet with rave reviews—from the four years as a headliner at the Bellagio/Las Vegas to national corporate engagements, performing arts centers, and resort bookings across the country—from Harrah’s Lake Tahoe to New England’s Big E music festival.  His accolades include “Pop Vocalist of the Year” by the San Francisco Concerto Orchestra, “Las Vegas Entertainer of the Year” by Gaming Today, and “Performer of the Year” by the Las Vegas Review-Journal.

Interestingly enough, it was his first year in Las Vegas at the Rio Hotel that he began singing opera.  One music critic aptly stated, “Hopper is Freddie Mercury meets Andréa Bocelli!”  The white spiked hair is startling in contrast to the five-octave, strong opera vocals which flow from his lips, when in the next breath he takes on symphonic rock that brings the house down.

Jimmy Hopper delivers a high-energy inimitable evening drawing fans of all ages.  He sings the soundtrack of our lives in perfect pitch.  As Ron Taft of Ron Taft Productions/Los Angeles summed it up, “Jimmy Hopper…the most amazing voice you’ll ever love!”