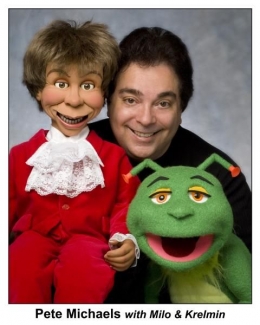 With major TV and Film credits like: Dummy; with Oscar winner Adrien Brody; Late Night with Conan O'Brien; Showtime At The Apollo; Canada's: Comedy At Club 54; Uptown Comedy Club; Comedy Central; Let's Laugh with Sherman Hemsley, and many others-- It's no wonder why Pete Michaels is one of the most IN DEMAND performers today!

Pete first appeared on stage at the tender age of five. His fascination with music, comedy, puppets and ventriloquism also began as a child; with his influences being Edgar Bergen, Paul Winchell and Jimmy Nelson. He continued performing during his high school years, often playing the musical comedy leads. An alumnus of The American Academy of Dramatic Arts in New York, he furthered his acting studies with Weist-Barron and studied voice with Robert Marks.

He developed his talents further by showcasing his comedy and ventriloquism at numerous venues. Pete continued to perform in Comedy Clubs and on Cruise Ships, quickly gaining wide acclaim and was soon a regular at the world famous Apollo Theater with his black puppet pal; Woody D. The duo performed dozens of television shows, concerts and special events at the landmark venue.

His puppet friends include: The space alien Krelmin, The flamboyant Milo DeVille, The lovable Papa, Buddy, Mr. Johnson, Woody D., The "re-union" of Sonny & Cher and the Incredible Show-Stopping Luciano; with Pete providing the actual operatic singing voice to nationwide STANDING OVATIONS! (Performed by SPECIAL REQUEST and at SMOKE FREE VENUES ONLY.)

Pete Michaels is a member of SAG & AFTRA. He is also an accomplished vocalist and musician, serves on the Advisory Board of the Vent Haven Museum, has chaired the International Ventriloquist Convention and pioneered the first Video Home-Study Course on the art of Ventriloquism called; "Video Ventriloquism."

He was featured in A Really Big Shew (A Tribute To The Ed Sullivan Show) at the Tropicana Hotel and Casino Showroom in Atlantic City and received an unprecedented 33 standing ovations during his run. In addition to performing his comedy-ventriloquism in the show, he also appeared as legendary comic Jackie Mason!

Recently, he was the featured subject of a documentary called "Soul In A Suitcase," which was awarded the National Board Of Review Of Motion Pictures Award.

He also topped the bill in Sherman Hemsley & Friends at The Claridge Casino & Hotel in Atlantic City!

Pete is a favorite headliner at Comedy Clubs, Casinos, Cruise Ships, Resorts and Colleges across the country.