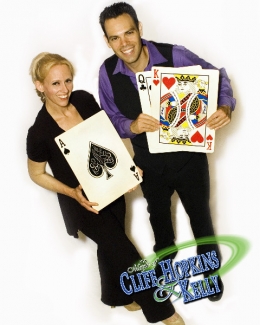 Magical, mysterious and fascinating to watch are only a few of the attributes used to describe the Illusionist/Magician Cliff Hopkins. Whether slicing a woman in half while she’s standing up, making it snow indoors or defying the laws of gravity, Cliff leaves audiences and critics alike scratching their heads in wonder at his unique and often unbelievable performances. For more than a decade, the witty, personable and fun to watch grand illusionist and comedy magic professional has been astounding audiences in some of the largest performing art theaters, colleges, corporate environments and theme parks around the world.

Expressing a gift for his unique capability at the tender age of seven, Cliff’s very first magic performance was seen during a talent show in the first grade. His career fate was sealed just after his parents took him to see Doug Henning perform. Mesmerized and awestruck at Doug’s performance, it was at that moment that his true passion for magic was completely cemented. Quoting Cliff: "I love performing and being in front of people. In fact, when I got my first standing ovation, I knew then that I could truly entertain people through magic. To my way of thinking, it’s a matter of differentiating oneself in the world of magic and finding your own niche. Copperfield creates spectacular illusions. David Blaine is into endurance stunts. Penn & Teller blend magic and the macabre. My thing is telling stories. In fact, I deal with real-life events that people can relate to on a more intimate level. That’s my inspiration.”

Whether working as a featured performer at a foremost event or at a college function conducted at a major University, Cliff’s performing resume is impressive. A warm, friendly and true entertainer, his clients sing his praises without hesitation. In fact, he has entertained a host of celebrities including Bobcat Goldthwaite, been featured on an array of television and radio shows, performed at the world famous Magic Castle in Hollywood, California and has conducted his act for countless Fortune 500 companies including Six Flags Darien Lake Theme Park, Wal-mart, Sony and General Electric Company to name a few.

Here’s what a few of his corporate clients have to say about Cliff. Brian Cousins, Entertainment Director, Six Flags Darien Lake Theme Park, stated: “It was the best magic show we’ve ever had! I cannot say enough regarding the enthusiasm and quest for enhancement Cliff and Kelly bring to their work everyday. A tremendous worth ethic and dedication is what they bring to the table. Guests are treated courteously, respectfully, and as though they've been a friend of theirs for years!” From Joe Novack, US Army: “The standard of your illusions is exceptional and your interaction with the audience is brilliant. Your performance had the perfect combination of music, timing, confidence and demeanor!” “His show was fabulous! Cliff was funny, his tricks were amazing and my whole staff agreed that he was the best entertainment we’ve ever had!” stated Kelly Harrison, Analabs, Inc.

With an ability to create a sense of wonder, magic, illusion and uproarious laughter that is second to none, today Cliff flawlessly executes the most challenging illusionist concepts. Having done away with ordinary illusions, Cliff brings a host of fresh new visual, interactive, fast paced, magical experiences that are breathtaking. Combining high teach lighting, state of the art sound, special effects, side splitting comedy, eye popping magic, and cutting edge illusion are what guarantees that Cliff will thrill his audience with a theatrical experience they will never forget. Nothing short of spectacular, Cliff keeps his audience on the edge of their seats as they experience what some may deem as totally impossible.