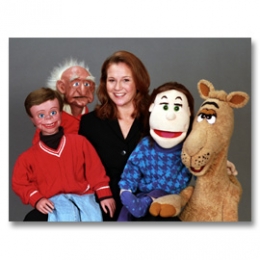 Lynn Trefzger, a self-taught ventriloquist, brings together amazing figure manipulation and exceptional vocal skills to create a fascinating comedy act which delights young and old throughout the country. Writing and developing her own original and endlessly inventive routines, Lynn thrives on her interaction with the audience.

Lynn has been amazing audiences since 1977. Her ability to individualize her performance for each group she entertains. Dummies, puppets, inanimate objects, and unsuspecting by-standers become part of the wild world that Lynn Trefzger and her comical partners create.

CAMELOT: An audience favorite! A seemingly intoxicated, lazy camel who has difficulty expressing himself!

JUDD WAPNER: A cranky old man who is constructed of latex. His facial expressions are enough to get the crowd rolling.

HUMAN DUMMIES: This becomes the highlight of each show! Lynn brings members of the audience on stage ... she creates a scenario ... under her guidance, the volunteers move their mouths as surprising voices are heard!