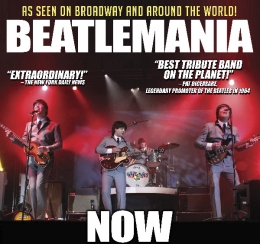 HEAR IT… SEE IT… BELIEVE IT!

BEATLEMANIA NOW is the ULTIMATE CELEBRATION of the epic and unequaled music of The Beatles!

BEATLEMANIA NOW is an amazing concert experience as seen on Broadway and Around The World!

Legendary Promoter, Pat DiCesare, who brought The Beatles to Pittsburgh, PA in 1964, says about BEATLEMANIA NOW, “Best tribute band on the Plant….real professionals!”

February 11th, 1964 witnessed The Beatles’ 1st ever concert in America, at the Coliseum Arena in Washington, DC, to the delight of throngs of screaming fans!  After being chosen from among the most elite Beatles Tribute Bands in the World, BEATLEMANIA NOW celebrated the 50th Anniversary of that historic event by performing live-in-concert to another “sold-out” crowd, at the very same Coliseum Arena, 50 years to the day, on February 11th, 2014!

BEATLEMANIA NOW members Scot Arch and Graham Alexander were chosen and filed against green screen backdrop for use as John and Paul for The Beatles Rock Band game.

Recapture the excitement, the mood and the frantic intensity as BEATLEMANIA NOW performs live-on-stage against a backdrop of stunning images which evoke memories of some of the most turbulent decades of modern times…. The 60’s and 70’s!  Flashback to historic moments of space exploration, protests in the streets, the raging war in Vietnam, “Flower Power” and “Peace and Love”… in the lives and deaths of Martin Luther King Jr., John F. Kennedy and Robert F. Kennedy, and the politics of Lyndon B. Johnson and Richard M. Nixon, as BEATLEMANIA NOW meticulously performs incredible note for note renditions of Beatle’s classics from throughout their entire career, including songs the Beatles’ themselves never performed outside the Recording Studios.”

BEATLEMANIA NOW… a must hear and see experience for all ages!