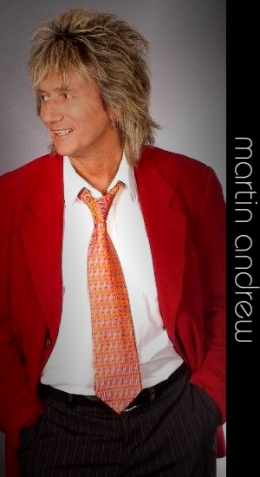 Martin Andrew is the man that recreates the Rod Stewart experience from his early days with the Faces, throughout the glamour of the 80's, to the more sophisticated Rod of the 90's and beyond.

A dynamic display of a world class entertainer performing the hits that made Rod Stewart a living legend.

Martin Andrew was born in Bury St. Edmunds England in 1962. As a youth he played the Violin in the local youth orchester and from 1973 to 1975 was a member of the Royal School of Church Music as a Chorister. As his musical interests grew Martin began playing the Bass Guitar and joined his first band BEOWULF in 1978 and played in and around Bury St. Edmunds (the band was also briefly known as Warhorse before splitting up in 1981).

After the 1981 split up Martin moved to London and joined the rock band HERETIC where he performed as the Bass player/Lead vocalist. The band had 2 hits in the Sounds British Heavy Metal Charts "Days Gone By" (#30 on the charts) and "Lights In The City" (#27 on the charts). The band toured the UK and signed a deal with the Magnum Music Group on the Thunderbolt Label in 1983. The 12" EP "Burnt at the Stake" was released in 1984. The LP "A Bolt From The Black" was also released in 1984. The band performed at the famous " Marquee Club" in London throughout the early 80's.

In 1989 Martin moved to Canada... recorded and released the EP "Night after Night". The title track retired undefeated on CKSL “Battle of the Bands” beating Kiss & Cher and Toured Canada as the “Martin Andrew Band” from 1990 / 1998

In 1999 Martin Entered into Stage and Film acting and became involved in a number of projects and productions.

Film / Television, Commercials / Voice Overs and Theatre filled his schedule along with performing on "The Great American Songbook in 2007. In 2008 Martin wrote and published his first book...autobiography "Nobody Said it Was Easy."

Nobody said it was easy...but it's been one heck of a great ride for Martin Andrew...and the show goes on!