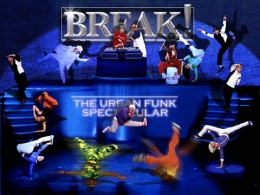 BREAK ! The Urban Funk Spectacular is the cutting edge of dance at the dawn of the 21st century. The cast of BREAK! and their unorthodox creative movement demonstrate a distinctive American art form which finds its roots in the streets of the inner city. BREAK ! Performers have all been featured as soloist dancers in worldwide performances with show business legends including Puff Daddy, Janet Jackson, Ringo Star, Whitney Houston and Luther Van Dross. Cast members are supremely talented specialists from the world of break dancing, locking, "electric boogaloo" or "popping," and power tumbling. The company of BREAK was presented at The 2000 Edinburgh Festival in Scotland, and has gone on to tour performing arts centers throughout US. BREAK! most recently has completed a tour of Korea where they were featured at Olympic Park in Seoul in a 5000 seat arena.

WHAT IS BREAK DANCE (B-BOYING)

Although the exact beginning of break dance is unclear, it seems to have emerged as a style of street dance during the 70's. Involving a variety of footwork patterns, spinning and various gymnastic-like actions, it was heavily influenced by a number of sources. Most critics agree on the African influence of the dance. Among the theories of the origins of break dance, many consider James Brown and 1969 hit "Get on the Good Foot" one of its starting points. Inspired by his energetic and almost acrobatic dance on stage, many people began dancing on the "Good Foot," often incorporating moves that involved drops or spins. Others attribute the extreme popularity of martial arts films during the 70's to the beginnings of break dance since elements of these types of movements are also prevalent. The term, "break dancing" actually arose with the growing recognition of this art form in the media. The early 80's battles between dance crews attracted the attention of the public and Breaking or "break dance" became associated with other street dance styles such as Locking and Popping.